Report of the Company Visit

Team Cross FA is working on factory automation using the latest robotics technology and this facility runs by Team Cross FA. The place we visited is showcasing various robots used in the manufacturing industry. Currently, they are moving forward to automating the manufacturing process with the help of cutting-edge AI technologies according to Industry 4.0 standards. This facility demonstrates the manufacturing process using various robot arms made by Yaskawa, FANUC, DENSO, EPSON, FA.COM, and Mitsubishi. The production line is developed as separate so-called cells and cells can be connected using conveyor belts or delivery robots. All sensor data and resource consumption including power, water, and gas are recorded during the process. Recorded data is uploaded to cloud storage to further analysis.

Logo at the entrance of the lab.

Nine different cells of the manufacturing process were demonstrated in this factory visit. Every cell is comprised of robotic arms with different grippers depending on the activity. Each cell contained various sensors including, RGB cameras, photoelectric sensors, and laser scanners. Each robotic arm in a cell is controlled by a computer by processing all the data received from attached sensors. 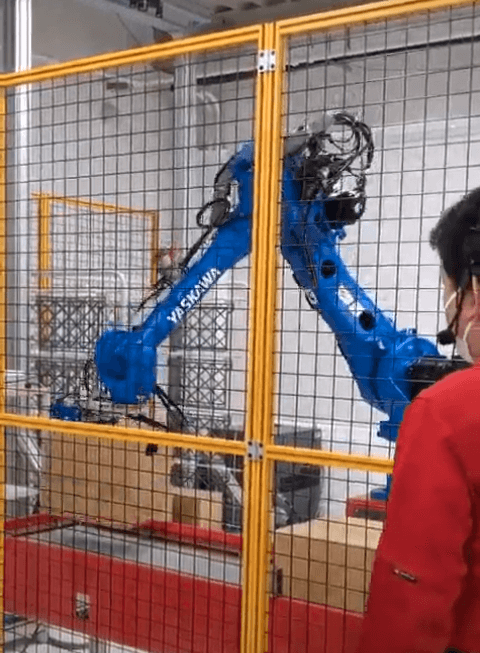 1.Box picking robot
The first one is a box picking robot that uses a strong suction gripper to pick cardboard boxes. The position of the box is determined by the laser range sensor. This robotic arm is a product of the Yaskawa company specially designed for lifting heavyweights. 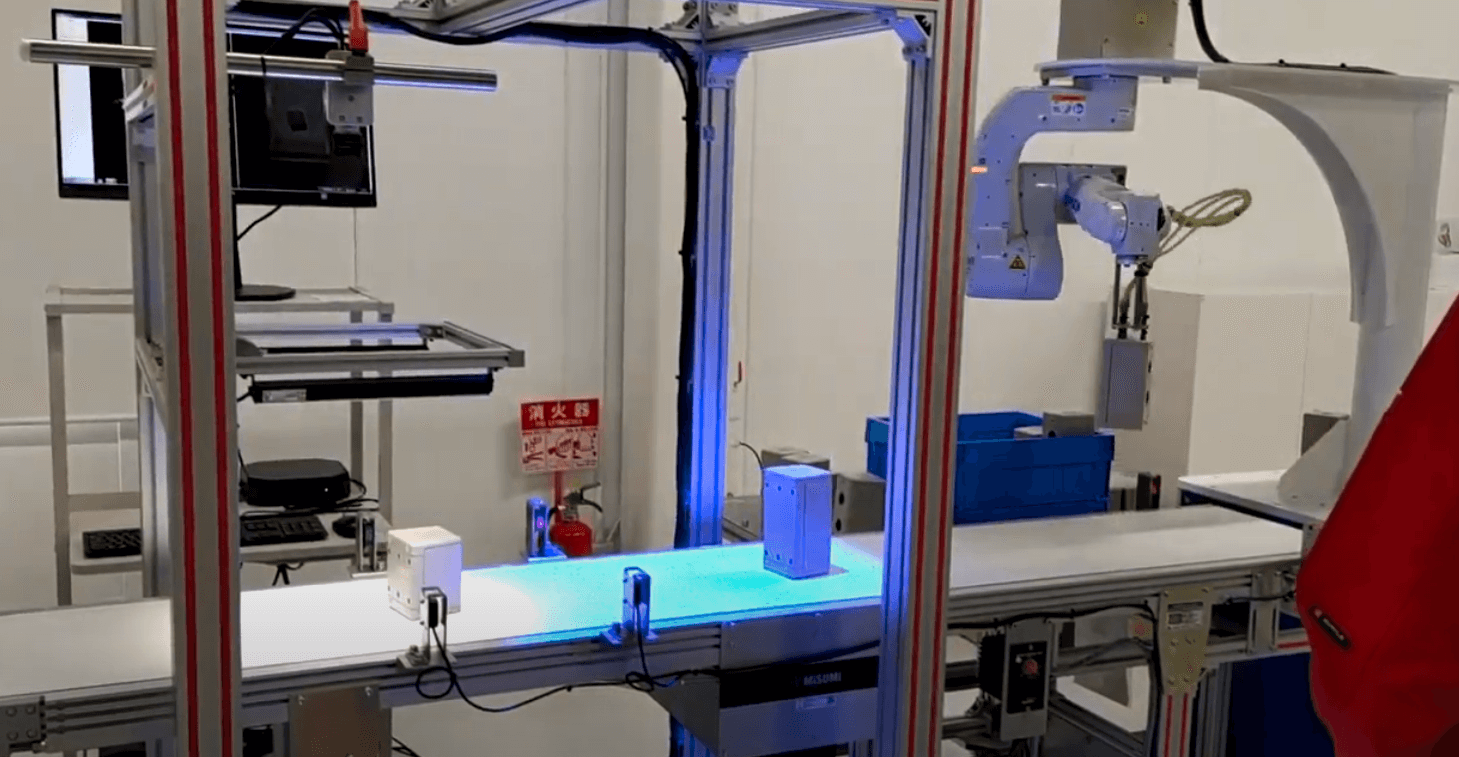 2. Box arranging robot
This automation is for arranging small box-shaped objects with a robotic arm. Objects are moving on a conveyor belt and the position of the object is detected by two photoelectric sensors. This arm can pick objects with different heights with the same width and length. The arm was developed by EPSON that uses a suction gripper to pick objects. 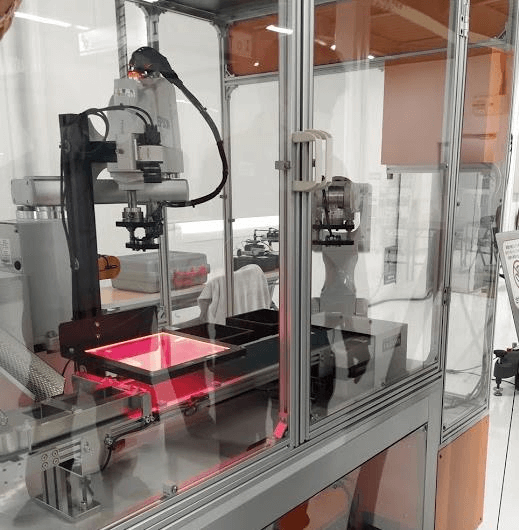 3. Assembler
Two robotic arms are working together to assemble two pieces of metal parts by matching the shape. A usual camera was used to capture an image of two pieces moving on the conveyor belt. Red light is used to reduces the shininess of objects and enhance the quality of the image. Both robotic arms are manufactured by EPSON and used a suction gripper to pick objects. 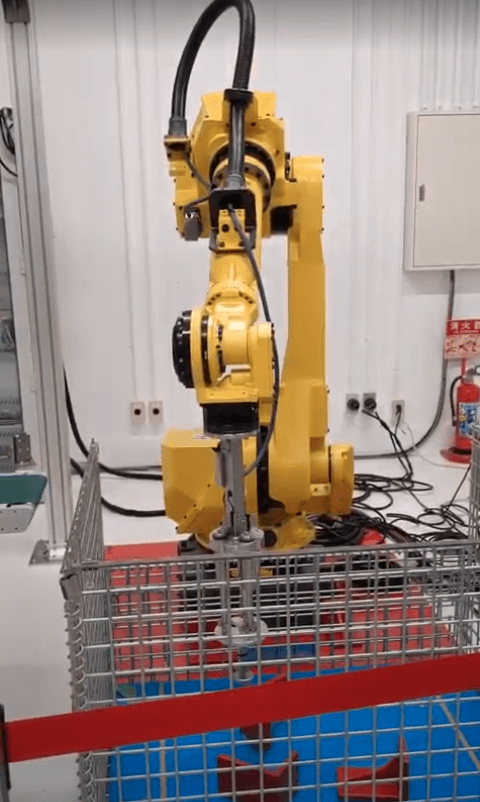 4. Object picking robot
This robotic arm is designed to pick up objects from a container and place that on a conveyor belt in a specific orientation. A 2D laser scanner placed on top of the container was used to capture the position and orientation of the object. This heavy-duty arm was developed by the FANUC robotics company for factory automation. A magnetic gripper is used in this case since objects are metal. 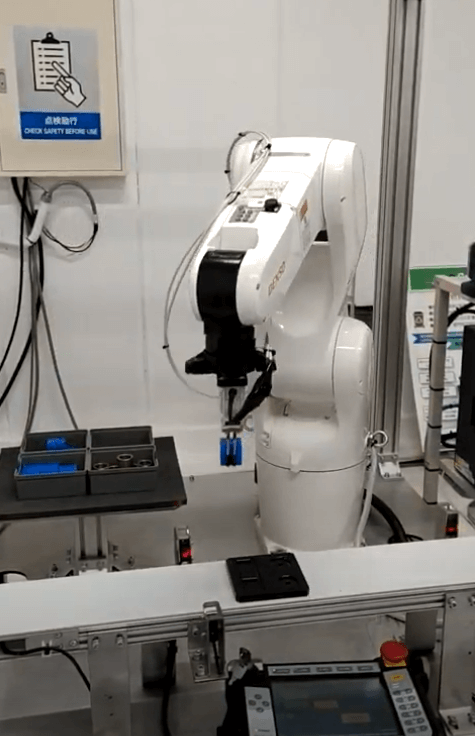 5. Stationary pick-and-place robot
This robot can place small objects in specific places depending on the shape. A 2D laser scanner is used to identify the positions and shape of the objects in the containers. After the identification, the robotic arm places the object in the designated place of the tray comes through the conveyor belt. This robotic arm with a two-finger gripper was developed by the DENSO robotics company. 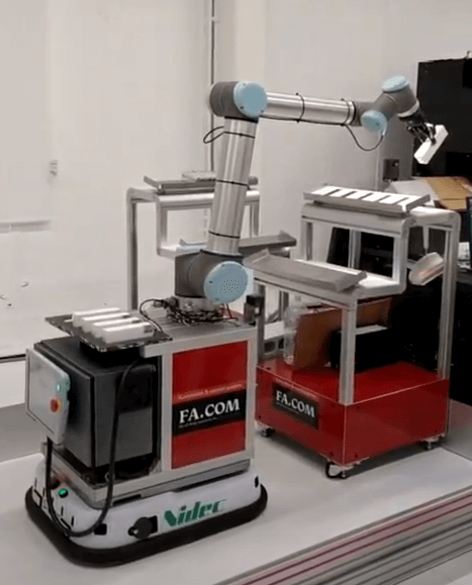 6. Mobile pick-and-place robot
This is a mobile robot with a robotic arm that can move from one place to another. This robot can pick up fixed-size objects with the attached two-finger gripper and place them on the tray attached to the body. After picking up a specified amount of objects, the robot moves to another place to unload them in a designated place. This system including software is developed by Office FA.com. 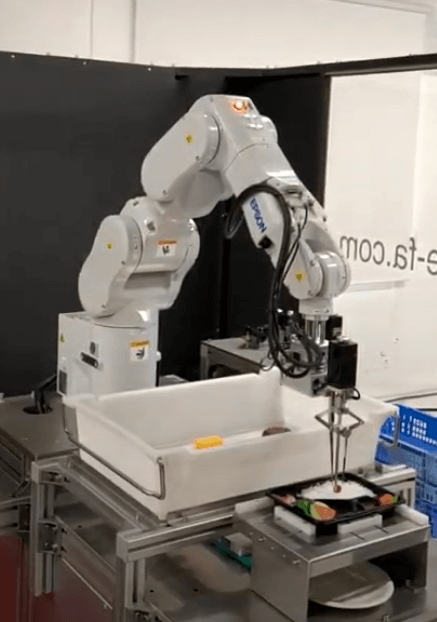 7. Pick-and-place robot for food processing
The specialty of this automation is the gripper of the arm can be changed depending on the task. A 2D laser scanner is used to identify the food items in the container. After placing the food items in the bento box using the attached gripper, the arm changes the gripper by itself without any human interaction. This robotic arm is also developed by ESPON company. 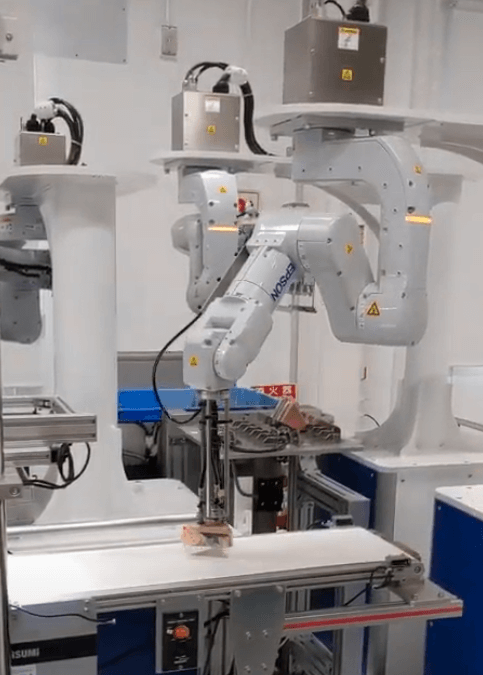 8. Object arranging process
This cell contains three inter-connected robotics arms that are working together to arrange “Onigiri” in a basket. One robotic arm is picking up food items moving on the conveyor belt and after filling up the specified amount the second arm places the whole set in the basket. The third robot is doing the task of replacing the basket with a new one after filling up the basket. Special grippers designated for the given task were used in each arm. All the robotic arms in this cell are developed by EPSON. 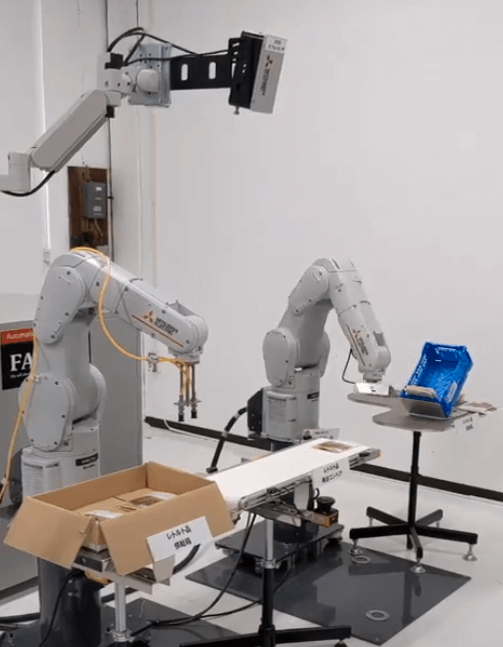 9. Item arranging robots
Two robotic arms that are developed by the Mitsubishi company are working together to arrange thin items in a box. Items in the box are identified by a 2D laser scanner. One robotic arm picking up items from a box and places them on a conveyor belt with a suction gripper. The other robot picks items that reaching to the end of the belt by tray attached to the arm and place them in another box.

Recently, factory automation is getting popular with the fourth industrial revolution or industry 4.0 and Japan is always actively involving in the robotics and automation field to improve the performance of the manufacturing process. The SMALABO facility is a better way to showcase the latest technology related to factory automation and convince people to utilize this technology. These demonstrated production line automation cells are especially for the industries such as food processing, electronic manufacturing, and metal processing. Also, Building the production line as separate cells for specific processes provides more reusability. Team Cross FA who is running the SMALABO is not just working on integration but making the production line automation smarter. Apart from hardware technologies, the latest AI concepts have been used for this process to increase the efficiency of automated units. This is one way to use AI concepts with a large amount of sensor data and it motivates researchers to work on smart cyber-physical systems.